September 26, 2020, will be the seventh International Day for Total Elimination of Nuclear Weapons.

Join people around the world in celebrating the vision of a nuclear weapons free world, raising awareness and calling on their leaders to advance nuclear disarmament.

For 2020, UNFOLD ZERO will be joining with other organisations to organise a global webinar on nuclear abolition on September 26. The webinar will be part of #WeThePeoples2020, a series of UN High-level events and associated civil society actions, from September 21 (UN Day for Peace) until October 2 (UN Day for Non-violence).

Call on your government to speak at the 2020 UN High Level Meeting on the Elimination of Nuclear Weapons to:

a) affirm that a nuclear war should never be fought,
b) call for the elimination of nuclear weapons by 2045, and
c) support the end of investments in the nuclear weapons industry.

Send a letter or email or tweet to your President/Prime Minister/Foreign Minister and Ambassador to the United Nations, calling on them to promote nuclear abolition at the UN High Level Meeting  on the Elimination of Nuclear Weapons on October 2, 2020

Sample letter to your government urging them to participate effectively in UN High-Level Meeting on the Elimination of Nuclear Weapons (Oct 2, 2020).

The UN General Asembly is hosting a High Level Meeting on the Elimination of Nuclear Weapons on October 2.

I/we encourage you in particular to:

Thank you
[your name]

Take back the power (and money) from the nuclear weapons industry.

Help take back the power (and money) from the nuclear weapons industry by joining the Move the Nuclear Weapons Money campaign.

Send a quote in support plus a photo of yourself to Move the Nuclear Weapons Money and they will turn it into a social media meme for posting on facebook, twitter, instagram etc…

Watch the docu-drama “The Man Who Saved the World”

On the night of September 26, 1983, Stanislav Petrov disobeyed military protocol and probably prevented a nuclear holocaust. He says that he is not a hero: ‘I was just in the right place at the right time.’ Watch this powerful docu-drama about the incident, and you decide!

In this tense time, a nuclear war was almost started by an error.

When an alarm suddenly went off at Soviet nuclear early warning center Serpukhov-15, Stanislav was responsible for reacting to information from Soviet satellites that five American nuclear missiles were heading toward the Soviet Union. Rather than initiate a nuclear retaliation, Stanislav went against protocol, and assured his colleagues that it was a false alarm.

He was right. His decision saved the world from a potential devastating nuclear holocaust. But he went unrecognised for this action for decades.

The Man Who Saved the World recreates those tense moments in 1983 when Stanislav was faced with the decision of his life. And it chronicles his spectacular journey to the United States three decades later, where he was finally acknowledged for his historic deed and found the strength to reconcile with his past.

In the film we see him reflecting on the current state of nuclear tensions as he visits a US nuclear missile silo. He is honoured at the United Nations. And he is thanked for his actions by celebrities including Walter Cronkite, Kevin Costner, Robert De Niro, Matt Damon, and Ashton Kutcher.

Shot on location in the former Soviet Union and the United States, The Man Who Saved the World shines a light on the continued risks of nuclear weapons today, and the challenge to reject nuclear weapons in order to prevent an unimaginable disaster. 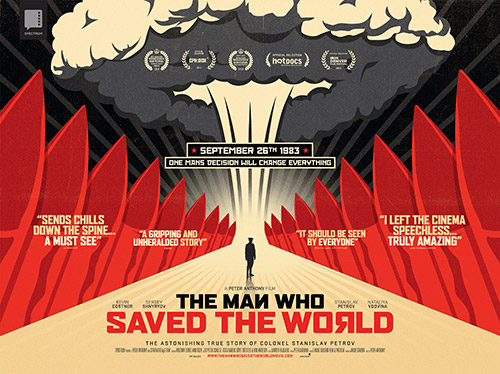 Special on-line screening followed by discussion with Peter Anthony, the Director and Screen-writer.

UNFOLD ZERO and #WeThePeoples2020 are organising special screenings of this powerful movie on September 27 and 28, 2020, in conjunction with the International Day for the Total Elimination of Nuclear Weapons.

Click here to listen to a BBC interview with Stanislav Petrov.