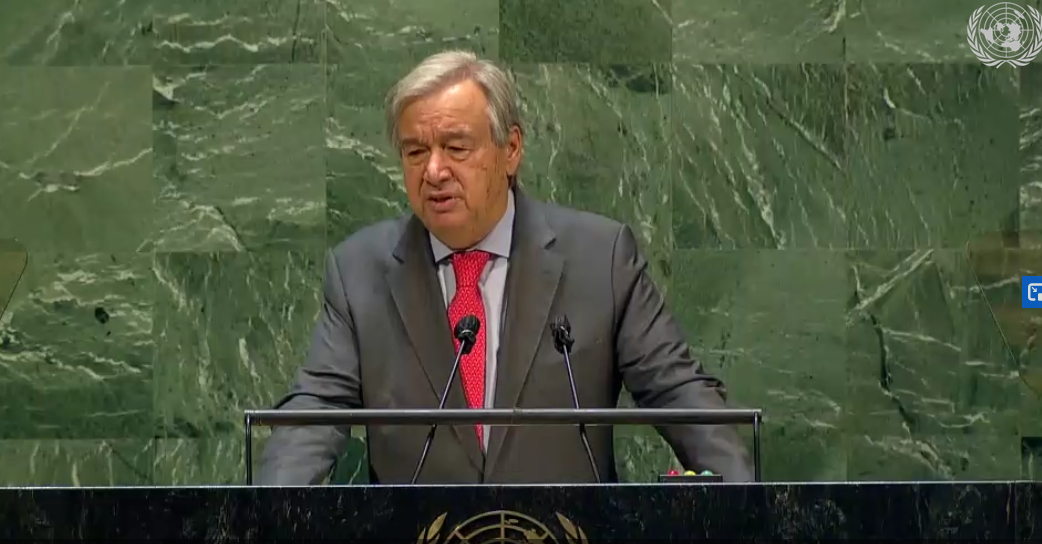 On September 26, UN Secretary-General António Guterres issued a warning to the world about the growing threat from nuclear weapons and expressed deep concern that the increasing strategic competition between nuclear-armed states could lead to a nuclear catastrophe. He reminded UN Member states of their obligations to achieve nuclear disarmament.

77 Heads of State and Ministers took the opportunity to address this in the United Nations High Level Plenary Meeting on the Total Elimination of Nuclear Weapons which was held on October 2 in the UN General Assembly and by virtual participation.

This is the highest number of Presidents, Prime Ministers, Foreign Ministers and Defense Ministers to have addressed any of the high level meetings which have taken place annually since 2013 to commemorate the International Day for the Total Elimination of Nuclear Weapons.

This large participation of governments at ministerial level clearly indicates a widespread and deep global concern about the issue. However, only one high-level representative from a nuclear-armed state (India) and only one from a nuclear allied state (Turkey) participated. This reflects the serious division and lack of dialogue between states that currently rely on nuclear weapons for their security and those that don’t.

In addition to heads of government, the six hour long meeting was addressed by top UN officials and two speakers from global civil society, who were invited to do so by the President of the UN General Assembly. (See civil society below)

Click here for a short video (2mins) with selected quotes from speakers at the High Level Meeting. The videos of all presentations will be posted here in the upcoming days.

The event was chaired by H.E. Vlokan Bozkir, President of the 75th Session of the UN General Assembly, who opened the event with a strong presentation reminding us that the UN was born out of the ashes of WWII and the nuclear bombs dropped on Japan. “This General Assembly was clearly committed to nuclear disarmament from its inception: the very first resolution passed in 1946 aimed to achieve global nuclear disarmament,” Mr. Bozkir explained. Yet, “some Member states have threatened to restart nuclear testing.” He called on UN member states to fulfill their obligations to end the nuclear arms race and achieve the comprehensive elimination of nuclear weapons. “We cannot afford to waste any more time.”

H.E. António Guterres, UN Secretary-General, followed with an impassioned speech warning that the world continues to live in the shadow of nuclear catastrophe. He urged nuclear armed states to take practical steps to reduce nuclear risks. “It is imperative that the Russian Federation and the United States of America extend, without delay, the “New START” Treaty for the maximum duration of five years,” Mr. Guterres suggested. “We have seen yet again that to confront global threats, we need a strengthened, inclusive and renewed multilateralism built on trust, based on international law and with human security at its center,” the Secretary General continued, calling on all members of the Non-Proliferation Treaty to work towards a positive outcome to the Review Conference next year that takes forward concrete nuclear disarmament steps.

The following calls were made by world leaders and civil society representatives for UN member states, and in particular the nuclear armed and allied states, to:

Below are examples of leaders making such calls:

The adaptation of nuclear risk reduction measures such as no-first use was strongly advocated by India, the only nuclear armed State to participate at high-level. “We believe that nuclear disarmament can be achieved through a step by step process,” Foreign Secretary Mr. Vardhan Shringla asserted, advocating for a “universal commitment and an agreed multilateral framework.” Mr. Shringla further explained that “India remains convinced of the need for a meaningful dialogue among all states possessing nuclear weapons, building trust and confidence.”

Azerbaijan and the Non-Aligned Movement:

“It is time to take a new and comprehensive approach on nuclear disarmament,” Mr. Azimov, the Deputy Minister of Foreign Affairs of Azerbaijan, asserted on behalf of the 125 member countries of the Non-Aligned Movement.

Iranian Minister of Foreign Affairs Mr. Javad Zarif called “on the General Assembly to declare as a binding norm of international law that nuclear war cannot we won and must never be fought. This should be followed by a long overdue concrete program for time-bound nuclear disarmament and provision of security assurances to non-nuclear weapons states.”

Cutting nuclear weapons budgets and investments and redirecting these to addressing the pandemic and achieving the sustainable development goals were other strongly supported calls in the high level meeting.

“These figures [on nuclear weapons spending] are immoral and inacceptable,” commented Mr. Solano Quirós, Minister of Foreign Affairs of Costa Rica. “Costa Rica urges governments and peoples to take up the task set out in Article 26 of the Charter of the United Nations to develop a collective security system that can lead to a reduction in military spending and the eventual elimination of the production and possession of nuclear weapons,”

Mr. Quirós appealed further that “Article 26 should be our mantra as we seek the necessary resources to eradicate the pandemic and achieve the most ambitious and comprehensive human development program ever conceived, the 2030 agenda and the Sustainable Development Goals.”

The exorbitant budgets for nuclear weapons were also criticized by Mr. Gallegos, Ecuador Minister of Foreign Affairs. “This is a time when the international community is struggling to deal with the CORONA-19 pandemic,” said Mr Gallegos. “It is senseless that the world spends 30 times more annually on nuclear weapons than on the World Health Organization.”

Speakers also encouraged all Member States to support already existing treaties such as the Nuclear Non-Proliferation Treaty (NPT), Comprehensive Test Ban Treaty (CTBT) and the Treaty on the Prohibition of Nuclear Weapons (TPNW).

“[The NPT] remains the cornerstone of the nuclear disarmament and non-proliferation infrastructure,” Mr. Coveney, Foreign Affairs Minister of Ireland, reminded all listeners. “This year we celebrate its 50th anniversary. Implementation of the disarmament pillar of the NPT has been far too slow.”

Amongst the countries that spoke in support of the TPNW, Tommy Remengesau Jr, President of Palau noted that the Treaty was consistent with the Constitution of Palau which prohibits nuclear weapons. “We welcome recent ratifications including from our Pacific neighbors Niue and Fiji, which are bringing us closer to its entry-into-force.”

“The international community must take steps that result in timebound and concrete outcomes aimed toward eliminating nuclear weapons.” However, he noted that the Marshall Islands was not prepared to sign the TPNW. “We remain deeply concerned by provisions in the treaty that wrongfully place a heavy burden of victim assistance and environmental remediation only upon the nations impacted by the nuclear tests and absolving those nations which undertook the tests.”

Finally, a number of speakers called for UN Member States to commit to the total elimination of nuclear weapons within a specific, realistic timeframe.

Mr. Tleuberdi, Minister of Foreign Affairs of Kazakhstan analyzed the current state of affairs, “We need to redouble our efforts and join our synergies with unfiltering determination to free humanity from the threat of nuclear weapons by 2045, the 100th anniversary of the United Nations. That is what our first president, Nursultan Nazarbayev, has called for. There is no other pressing global goal today.” Mr. Tleuberdi further acknowledged the role of Kazakh youth active in the field.

Two members of global civil society were invited by the President of the General Assembly to address the High Level event. They were Mr. Saber Chowdhury MP (Bangladesh), Co-President of Parliamentarians for Nuclear Non-Proliferation and Disarmament, and Ms. Vanda Proskova (Czech Republic), Vice-Chair of PragueVision Institute for Sustainable Security and one of the conveners of #Wethepeoples2020.

Mr. Chowdhury urged that “We all have a key role to play and engage with governments to ensure implementation of nuclear disarmament obligations, and in diverting resources from nuclear weapons to positive impacts for the economy, livelihoods and protection of nature.” (Click here for his video presentation).

Ms. Proskova recalled that nuclear weapons “are dangerous whether they are used on purpose or due to a miscalculation. They are extremely harmful to the environment which we are so vehemently trying to protect. In the 21st century they are simply obsolete. And, what is more, they are phenomenally expensive.” (Click here for her video presentation).

Correspondingly, Move the Nuclear Weapons Money is advocating for a shift of spending and investing from nuclear weapons to sustainable development. Click here to find how to get involved.

Both of the civil society representatives called on all UN members to de-escalate the nuclear arms race, redirect nuclear weapons budgets and investments to meet human security needs, and commit to the total elimination of nuclear weapons by 2045, the 100th anniversary of the UN.

We the Peoples Global Appeal

In conjunction with the International Day for the Total Elimination of Nuclear Weapons, #WethePeoples2020 released Protect People and the Planet: An Appeal for a Nuclear-Weapon-Free World. The appeal takes forwward the calls for nuclear disarmament made by Mr Chowdhury and Ms Proskova to the UN High Level Meeting on behalf of global civil society. We encourage you to read the appeal and endorse it.