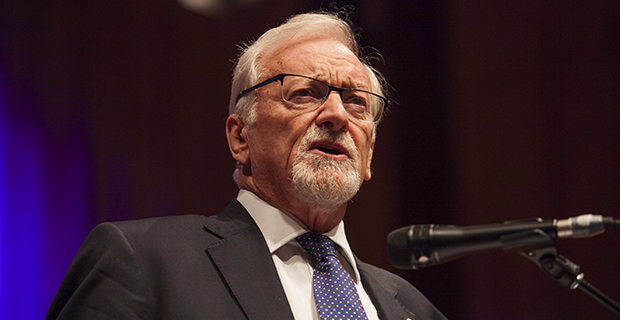 How to achieve a nuclear-weapons-free world.

On September 26, 2020, #wethepeoples2020 organised a global civil society event for the International Day for the Total Elimination of  Nuclear Weapons. The event included a panel of experts who discussed nuclear policies, political dynamics and how we can achieve a nuclear-weapons-free world.

Mr Evans highlighted the political difficulties in moving nuclear-armed and allied States to give up nuclear deterrence and eliminate their arsenals, and noted that it is highly unlikely they will join the new Treaty on the Prohibition of Nuclear Weapons.

However, he emphasised that progress toward a nuclear-weapons-free world is possible ‘if we do four things: utilize the power of emotion; utilize the power of reason; unite around a common, realistic disarmament agenda that does not make the best the enemy of the good; and, above all, stay optimistic.’

Below is Mr Evans’ opening presentation for the September 26 panel. Click here for a PDF version.

How to achieve a Nuclear Weapons Free World
Presentation by Gareth Evans, September 26, 2020

The nuclear weapons age began here in the Asia Pacific, when the bombing of Hiroshima and Nagasaki put beyond argument that nuclear weapons are the most indiscriminately inhumane ever devised. But, seventy-five years later, the distressing reality we have to face is that the risk of nuclear catastrophe is as great as it has ever been, and the goal of achieving their elimination from the face of the Earth is as far from achievement as it has ever been.

Existing nuclear arms control agreements are dead or dying. Hopes for progress on denuclearizing the Korean Peninsula have completely stalled.  There has been no progress on moderating the salience of nuclear weapons in strategic doctrines: if anything the reverse.  With no action on disarmament by the nuclear weapons states, global commitment to the Nuclear Non-Proliferation Treaty remains fragile, and efforts to strengthen it impossible.  As to the Nuclear Weapons Prohibition Treaty, as much as we applaud its normative impact and look forward to it coming into force, there is no prospect whatever, for the foreseeable future, of any nuclear armed state joining it.

And our own Asia-Pacific region is again at the epicenter of global nuclear threats with six nuclear-armed states now straddling fault lines running through the Korean Peninsula, China’s eastern and southern coastline and across the Himalayas –  and all six of them currently increasing their nuclear profiles.

But as depressing as all this is, we must never abandon the dream of achieving the elimination of nuclear weapons from the face of the earth, and we must pursue that dream with a new sense of urgency. The risk of catastrophic misuse of nuclear weapons, deliberately or ― more likely ― by accident or miscalculation, is as grave and immediate as it has ever been. And the existential threat this poses to life on this planet as we know it, is in no way less than those of climate change and global pandemics, and in many ways more immediate.

So what do those of us who want a safer, saner, nuclear-weapon free world actually now do? In this very difficult environment, what do we work for and what do we argue for to bring all the key political players to the understanding that – as Reagan and Gorbachev memorably agreed thirty-five years ago – “A nuclear war can never be won and must never be fought.” And what can we do to not only get political leaders to recognise that reality, but to act on it?

There are no quick returns here. Making progress on nuclear disarmament is always going to be a slow, grinding, frustrating, unrewarding process. But I do believe progress  can be made if we do four things: utilize the power of emotion; utilize the power of reason; unite around a common, realistic disarmament agenda that does not make the best the enemy of the good; and, above all, stay optimistic.

Emotion. Emotion matters at all levels.It is important not to underestimate the extent to which, in high-level government nuclear decision-making the sheer indiscriminate inhumanity of any nuclear weapons use continues to play a part. Even the most hard-headed policymakers in the nuclear-armed states have to take seriously the profound normative taboo which still exists internationally – among both governments and publics worldwide – against any deliberate, aggressive use of nuclear weapons, at least in circumstances where the very survival of a state is not at imminent risk. True, this hasn’t been enough to persuade nuclear-weapons-state policymakers to get serious about actually disarming, but it continues to be a key reason why deliberately aggressive first use of nuclear weapons remains less likely than a nuclear catastrophe generated by human or system error or miscalculation.

If those policymakers are ever to get serious about a nuclear-weapons-free world, it is crucially important not only that this taboo message be continually reinforced by their international peers and civil society activists, but that they have a sense that nuclear disarmament  has strong community support – that they come under strong bottom-up pressure.  And the best way of mobilizing that pressure will always be to harness again, in the way that we saw during the height of the Cold War years, the raw emotional power of Hiroshima and Nagasaki, and the horror and fear of that experience being repeated.

The problem here is that the world’s sheer dumb luck in avoiding a new nuclear holocaust for so long has generated a degree of complacency and indifference to nuclear risk which it has proved extremely difficult to overcome for even the most dedicated and able civil society campaigners – like PNND and ICAN and others associated with these UN Day events.I worry, as I guess must many of you, whether it will ever be possible to regenerate mass momentum, short of a new Cuban-style crisis developing in North Korea, or – God forbid – an actual nuclear exchange on the India sub-continent or elsewhere.

Reason.   This is one of the reasons why we have to utilize not only the power of emotion but the power of reason as well. I don’t think we can ever assume that we will get to a nuclear weapon free world through moral persuasion alone. Hard-headed policymakers know perfectly well that any use of nuclear weapons would be an indefensible assault on our common humanity. Many of them quite unashamedly argue that the sheer awfulness of nuclear weapons is what makes them so effective as a deterrent.

What they need to be persuaded about are the strategic arguments against nuclear weapons ― that their benefits are negligible, and far outweighed by the risks involved. It is not hard to make such a rational case. While I haven’t time to make that case in detail now, n very bald summary it has these elements:

A Realistic Disarmament Agenda.  In pursuing both disarmament and non-proliferation ― and indeed in many other policy contexts ― it is critically important for all of us to learn the art of compromise. In particular, we should never make the best the enemy of the good – i.e. take the view that settling for anything less than perfection is not compromise but capitulation.  In the case of nuclear disarmament,  pursuing a realistic, genuinely achievable agenda means being particularly careful about how we articulate the “global zero” objective.

In relation to the Nuclear Weapons Prohibition Treaty, we have to acknowledge that whatever its moral and emotional appeal – and it’s certainly emotionally appealing to me, as it will no doubt be to everyone participating in this event –   there are, quite apart from ideological reasons,  a whole variety of technical reasons, to do with safeguards, verification and enforcement, why it is manifestly not going to get buy-in from nuclear armed and umbrella states, now or perhaps ever.

I think we have to accept that nuclear weapons elimination is only ever going to be achievable on an incremental basis, building into the process a series of way-stations. Such a credible way forward was mapped by the International Commission on Nuclear Non-Proliferation and Disarmament (ICNND), which I co-chaired in 2009 with former Japanese Foreign Minister Yoriko Kawaguchi.

We urged that initial efforts focus not on elimination but on a “minimization” agenda, summarizable as the “4 Ds”: Getting a universal buy-in to No First Use (Doctrine), which is already supported at least by China and India; giving that credibility by taking weapons off high-alert (Dealerting); drastically reducing the number of those actively deployed (Deployment); and reducing overall numbers to around 2,000, down from the close to 14,000 now in existence (Decreased numbers).

A world with very low numbers of nuclear weapons, with very few of them physically deployed, with practically none of them on high-alert launch status and with every nuclear-armed state visibly committed to never being the first to use nuclear weapons, would still be very far from being perfect.  And no one should even think of settling for that as the endpoint.

But a world that could achieve these objectives would be a very much safer one than we live in now.  And I believe these major risk reduction objectives are achievable within a reasonable time frame: particularly if the United States comes again under civilized management, and picks up again under a new Democrat president the agenda to which President Obama was so obviously committed, both intellectually and emotionally.

Staying Optimistic.  My final short word is this.As desolate as the international environment for now remains, it is important to keep things in perspective. Pendulums do swing, wheels do turn, Presidents and Prime Ministers do change.

Optimism is self-reinforcing in the same way that pessimism is self-defeating. Achieving anything of lasting value in public life is difficult enough, but it is almost impossible to do so without believing that what seems to be out of reach really is achievable.

So it is up to those of us who believe in both the possibility and necessity of a nuclear weapon free world, however disappointed and frustrated we may be right now, to get out there and work for it, in every way we can and through every channel of influence we can mobilise.