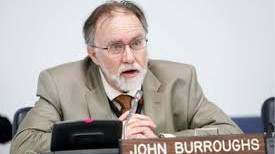 The present confrontation between the United States and the Democratic People’s Republic of Korea is extraordinarily perilous. It is profoundly disturbing that in the General Assembly Hall the two countries exchanged unlawful threats of total destruction and of use of intercontinental rockets.

It is urgent that diplomatic overtures replace threats and personal insults. In the nuclear age, the first principle of diplomacy should be that adversaries talk to each other to the maximum possible extent, and in moments of crisis directly and unconditionally. We learned during the Cold War that even when the prospects for any tangible progress seem dim, negotiations between nuclear-armed adversaries have other positive results. They allow the military and political leaderships of the adversaries to better understand each other’s intentions, and their fears. Accordingly, the United States and DPRK should engage in direct talks.

We also urge the Secretary General to work together with relevant states to open a new diplomatic channel with the DPRK. The aim would be to defuse tensions, address the DPRK’s security concerns, and halt and eventually reverse the DPRK’s nuclear and missile programs while also ending reliance on nuclear arms in the Korean context by the United States and other states.

It is not only in Northeast Asia that tensions are high and the international regime intended to control nuclear weapons is at risk. Opportunities in all forums, including this committee, should be seized for serious dialogue.

One such forum will be the UN High-level Conference on Nuclear Disarmament planned for 2018. We urge all states, and particularly states with nuclear arsenals, to participate at a high level of representation. In keeping with the intent of the initiative, the conference will be an opportunity to build on the outcomes of NPT Review Conferences and the 2016 Open-ended Working Group, especially those relating to nuclear-risk reduction, disarmament and the legal and institutional framework for a world free of nuclear weapons.

The High-level Conference should put in motion concrete measures, including to lower the operational readiness to use nuclear weapons; to freeze the development, acquisition, and modernization of nuclear arms; to establish additional regional nuclear-weapon-free zones; and to commence multilateral negotiations on the global abolition of nuclear weapons.

The conference should also provide space to advance the Treaty on the Prohibition of Nuclear Weapons. In this connection, we are happy to end on a positive note, by congratulating the International Campaign to Abolish Nuclear Weapons on the award of the Nobel Peace Prize.

Drafted by Lawyers Committee on Nuclear Policy (USA) and the Basel Peace Office (Switzerland, International) and endorsed by 61 other civil society organisations (listed below)