‘To disarm’ must be in present tense, says senior UN rep in Geneva

Report from the UN commemoration for the first International Day for the Total Elimination of Nuclear Weapons, organized by UNODA and UNFOLD ZERO and co-sponsored by Permanent Missions of Indonesia, Kazakhstan, Zealand and nearly 100 non-governmental organisations. (See invitation)

‘To disarm’ must be in present tense,
says senior UN Disarmament Officer at the Sep 25 event in Geneva

The importance of taking action now for nuclear disarmament – rather than waiting for the future – was highlighted by Gabriele Kraatz-Wadsack from the United Nations Office of Disarmament Affairs in her address at the United Nations in Geneva for the first International Day for the Total Elimination of Nuclear Weapons.

The International Day was established by UN General Assembly Resolution 68/32 in order to enhance ‘public awareness and education about the threat posed to humanity by nuclear weapons and the necessity for their total elimination, in order to mobilize international efforts towards achieving the common goal of a nuclear-weapon-free world.’

The United Nations kicked off the first of numerous events and actions around the world with a commemorative event at the Palais des Nations in Geneva on September 25. The event was organised by UNFOLD ZERO, the Basel Peace Office and the United Nations Office of Disarmament Affairs, and was cosponsored by OPANAL, the Permanent Missions of Indonesia, Kazakhstan and New Zealand, and nearly 100 non-governmental organisations and networks engaged in peace, disarmament, human rights, environment, interfaith, democracy and sustainable development. 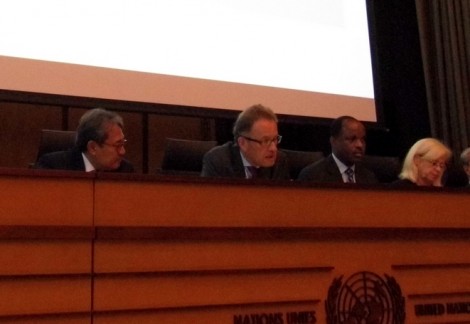 The event was opened by Mr Michael Moller, Director-General of the United Nations in Geneva. Mr Moller highlighted the importance of the day to generate the political will required to eliminate nuclear weapons, and thanked UNFOLD ZERO for mobilising civil society to engage with governments for this purpose. He noted that the many times the world has come close to nuclear holocaust indicate the vital importance of nuclear disarmament. ‘So long as nuclear weapons remain, peace and security will continue to be threatened… None of our speeches today will illustrate this as well as the movie being previewed  here today – ‘The Man Who Saved the World’ – which shows how close we can come to a nuclear catastrophe by accident or miscalculation.’ 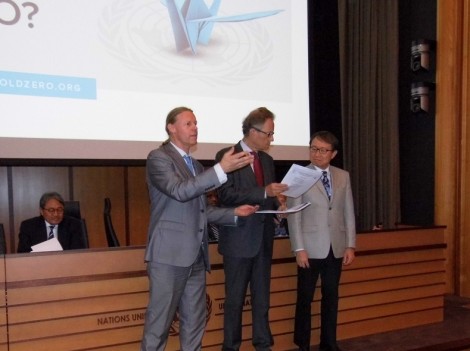 Ms Kraatz-Wadsack, in a substantive presentation for the event, noted the vast gap between commitments made to nuclear abolition – dating back from the very first resolution of the United Nations – and actual progress to prohibit the weapons and eliminate the stockpiles. She suggested that perhaps the States relying on nuclear weapons use the word ‘disarm’ to refer to some indeterminate time in the future, citing French Prime Minister Edouard Herriot who made a similar lament about conventional disarmament in Geneva in 1932. She noted that in order to prevent disaster arising from reliance on nuclear weapons, we have to turn the word ‘disarm’ from future tense to present tense.

Ambassador Jorge Lomónaco, Permanent Representative of Mexico to the UN, called for the start of multilateral negotiations now on a nuclear weapons convention, package of agreements or framework agreement, in order to prohibit nuclear weapons and provide for their elimination. He also called for support for the Mexican initiative to criminalise the use of nuclear weapons by including such use as a war crime under the jurisdiction of the International criminal Court.

Ambassador Triyono Wibowo, Permanent Representative of Indonesia to the UN, highlighted the success of the UN Open Ended Working Group to explore and advance proposals for multilateral nuclear disarmament negotiations, but lamented that most of the nuclear-armed States did not participate. He thus noted the importance of the International Day for the Total Elimination of Nuclear Weapons to increase the political momentum generated by the UN High level Meeting at the UN on September 26, 2013. Civil society and media have an important role, working with governments, to build political will.

Ambassador Mukhtar Tileuberdi, Permanent Representative of Kazakhstan to the UN, reported on the example of Kazakhstan which renounced the world’s fourth largest nuclear arsenal – and whose security was in no way diminished by this decision. ‘This shows that other nuclear-armed States could also renounce nuclear weapons without negative consequences on their security,’ he said. Ambassador Tileuberdi highlighted some initiatives of Kazakhstan such as the International Day Against Nuclear Tests, a draft Universal Declaration for a Nuclear-Weapon-Free World, and the ATOM Project which has generated nearly 100,000 signatures for their petition against nuclear tests and for a nuclear weapon free world. The petition will be presented to the leaders of the nuclear-armed States in the near future. 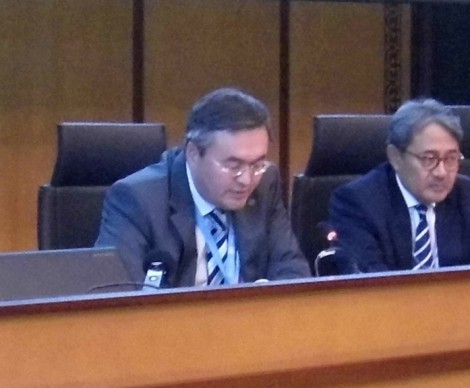 Ms Anda Filip, Director of External Relations for the Inter Parliamentary Union, highlighted the important role that parliamentarians could and should play in promoting, supporting and implementing nuclear disarmament commitments. The Inter Parliamentary Union, with 164 member parliaments including those of most of the nuclear-armed States, provides a suitable forum for parliamentarians to discuss, deliberate and develop cooperative approaches to achieve a nuclear-weapon-free world. IPU, with the assistance of Parliamentarians for Nuclear Non-Proliferation and Disarmament, has decided that this is a priority. It has held workshops, produced briefing materials and adopted resolutions to guide parliaments. These include a landmark resolution adopted at the 130th IPU Assembly in March this year and an upcoming workshop for parliamentarians on Oct 17 following the 131st IPU Assembly.

Mr Aaron Tovish, Campaign Director for Mayors for Peace 2020 Vision Campaign, spoke about the decision of the UN General Assembly to follow-up the 2013 High Level Meeting on Nuclear Disarmament with an even more ambitious High Level Conference on Nuclear Disarmament to be held no later than 2018. Mr Tovish noted that this conference could provide the best opportunity to achieve concrete results – not just a review of progress, not just a reaffirmation of commitments, but the adoption of actual multilateral measures that will pave the way for comprehensive nuclear disarmament. Mr Tovish noted that Mayors for Peace, numbering over 6000 cities, was determined to make this high level conference a success. ‘Cities were not build up over the ages to be obliterated in nuclear firestorms, nor to suffer the impacts of global famine from the catastrophic climatic consequences of the use of just a small number of these weapons.’

Mr Alyn Ware, Global Coordinator of Parliamentarians for Nuclear Non-proliferation and Disarmament and Co-founder of UNFOLD ZERO, reported on the widespread support for the International Day for the Total Elimination of Nuclear Weapons from civil society, evidenced by the co-sponsorship of this commemoration event from organisations and networks engaged in peace, disarmament, human rights, environment, interfaith, democracy and sustainable development from around the world.

Mr Ware announced the global public action which UNFOLD ZERO launched for September 26, videoing people around the world answering two simple questions – How many nuclear weapons do you think are in the world? And How many nuclear weapons do you think should be in the world? Mr Ware also announced the global premier of ‘The Man Who Saved the World’ (click here for the 6 minute preview), a documentary to be released at the Woodstock Film Festival in October 2014 about an incident on Sep 26, 1983 in which we nearly had a nuclear weapons exchange through faulty communications technology – a Soviet early warning system incorrectly indicating a nuclear attack – during a time of high international tension. (As if to prove his point, the technical equipment to show the preview crashed as Mr Ware introduced the film and the preview was unable to be shown). 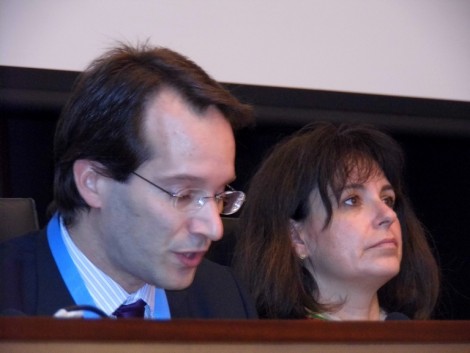 Mr Mariano Alvarez Wagner, First Secretary from the Permanent Mission of Argentina to the UN, presented a statement released for the International Day by the Organisation for the Prohibition of Nuclear Weapons in Latin America and the Caribbean (OPANAL). Mr Wagner highlighted the fact that a majority of States have found their security without reliance on nuclear weapons, including through the establishment of nuclear-weapon-free zones. He called for negotiations for a universal agreement prohibiting nuclear weapons and providing for their complete elimination. And he highlighted the UN decision to hold a High Level Conference on Nuclear Disarmament no later than 2018.

Alfred de Zayas, the United Nations Independent Expert on the promotion of a democratic and equitable international order, speaking from the floor, recalled the costs of military spending – especially spending on nuclear weapons. He noted the win-win benefits of reducing nuclear weapons spending to free up resources to support conflict prevention, conflict resolution and sustainable development. Mr Zayas stressed the importance of the cases lodged in the International Court of Justice against the nuclear-armed States by the Marshall Islands to move them to enact their nuclear disarmament obligations. He quoted UN Secretary-General Ban Ki-moon ‘The world is over-armed while peace is underfunded’, circulated a press release UN expert urges less military spending, more investment in development, and affirmed that he would continue to raise this issue in his reports to the UN Human Rights Council. 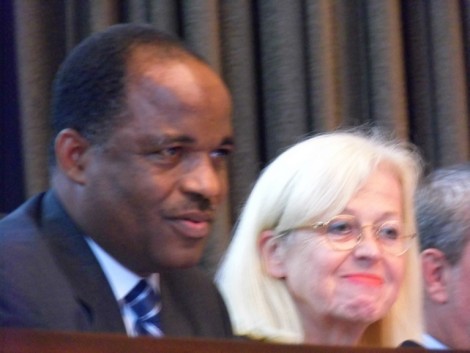 Mr Ivor Fung, Director of UNODA and the Chair of the event, closed the event with a further call to cooperation between governments, civil society and the United Nations to eliminate nuclear weapons from the face of the Earth, which he said is not just a noble goal but an obligation for guaranteeing meaningful international peace and security. Mr Fung argued that security in the 21st century should not be based on the threatened annihilation of generations of the human species. He noted the importance of the International Day for the Total Elimination of Nuclear Weapons to build public awareness and political will to ensure success. And he thanked UNFOLD ZERO for bringing together the key constituencies in civil society with governments and the UN to facilitate success.