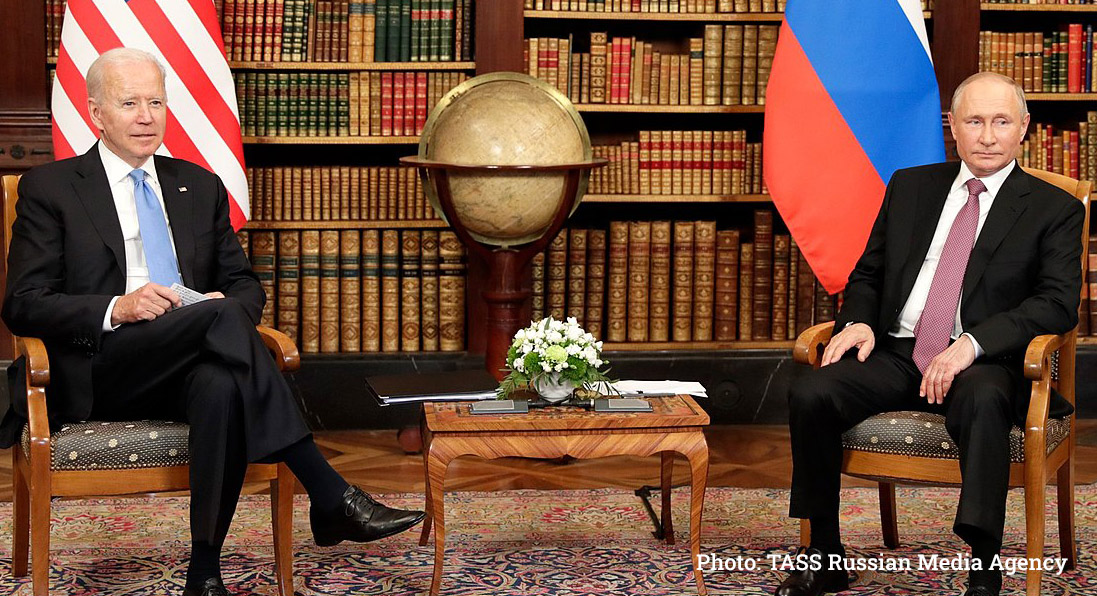 At their Summit Meeting in Geneva on June 16, President’s Joseph Biden and Vladimir Putin adopted a U.S.-Russia Presidential Joint Statement on Strategic Stability in which they reaffirmed ‘the principle that a nuclear war cannot be won and must never be fought’ and announced that they will embark together on an integrated bilateral Strategic Stability Dialogue in the near future. ‘Through this Dialogue, we seek to lay the groundwork for future arms control and risk reduction measures.’

This agreement advances key points in the Open Letter to Presidents Biden and Putin in Advance of their June 16, 2021 Summit, which was sent to the two leaders last week. The Open letter was endorsed by over 1200 political, military and religious leaders, as well as legislators, academics and scientists and other representatives of civil society.

The Strategic Stability Dialogue, to be emabrked upon by Russia and the USA, provides an opportunity to improve relations between the two countries, enhance their security, and make progress on nuclear risk reduction and disarmament.

Pessimists and cynics might perceive this commitment by the two leaders to be empty rhetoric. But many familiar with a similar strategic stability dialogue between the USSR and USA during the latter part of the Cold War, have evidence that it can succeed. In a post-summit Newsweek article Can Biden and Putin Ease Nuclear Dangers Like Reagan and Gorbachev, Jonathan Granoff compares the situation then and now, and points to a number of conditions that are conducive to potential success in the new bilateral process.

“In some ways the distance we need to cross to achieve it is not as great as in 1985. Back then, political rhetoric was even more incendiary than today—remember the “evil empire”? There were several hot surrogate wars underway. Russia and the U.S. together had around 60,000 nuclear weapons. Trade between our nations was less than $3 billion annually. Today, our two nations have fewer than 12,000 nuclear weapons, trade is around $35 billion, and we recently worked together to end the war between Armenia and Azerbaijan.”
Jonathan Granoff, Newsweek, June 24, 2021

Granoff arguees that a key to whether or not the US-Russia Strategic Dialogue will be successful or fail is whether the two countries will take an approach focusing on mutual security, or one focused on military superiority. Presidents Reagan and Gorbachev opted for the objective of mutual security. This paved the way for a number of arms control agreements and played a key role in ending the Cold War.

“This is the approach Biden and Putin need to take as the U.S. and Russia embark on strategic stability talks,” says Mr Granoff. “Instead of each seeking to preserve military advantage, they should agree that neither side will seek military superiority, and that the whole point is to prevent any war between them, which could be catastrophic. The best way to start enshrining that idea, and building trust, is to adopt a No First Use policy, where they affirm they will not be the first to initiate a nuclear attack. That would build trust and confidence globally.“

No-First-Use as an important initial step

In addition to affirming that “A nuclear war cannot be won and must never be fought”, the Open Letter to Presidents Biden and Putin calls on the USA and Russia to make a ‘joint commitment that their nations will not use nuclear weapons first under any circumstances, and to make this a key step toward fulfilling the United Nations goal to totally eliminate nuclear weapons from the planet.’ The adoption of such No First Use (NFU) policies should be one of the objectives of the Strategic Stability Dialogue that the two leaders are embarking upon.

If all nuclear armed countries stick to a commitment not to be the first to use nuclear weapons, a nuclear war cannot break out,” says Carlo Trezza, Former Italian Ambassador for Disarmament and Non-Proliferation and one of the drafters of the Open Letter.

“If a pledge of NFU of nuclear weapons is accepted by all nuclear weapons states it can produce a revolutionary turn initially leading to the erosion of nuclear weapons and finally to the complete elimination of such weapons of mass destruction from our planet for the benefits of all its inhabitants and the international security at large,” says Vladimir P. Kozin, Member of the Russian Academies of Military Sciences and Natural Sciences.

“It’s almost thirty-six years after US President Reagan and Soviet leader Gorbachev agreed that A nuclear war cannot be won and must never be fought”, says John Hallam, Director of People for Nuclear Disarmament (Australia) and co-convenor of the Abolition 2000 working group on nuclear risk reduction. “Yet the threat of nuclear war still looms large. In large part this is due to military doctrines currently in place in many of the nuclear-armed states, which don’t rule out using nuclear weapons first, including in response to a range of non-nuclear threats.”

There is growing traction globally for the adoption of NFU policies by the nuclear armed (and allied) states, as evidenced by legislative action, public appeals and NFU campaigns including the global campaign NoFirstUse Global.

The adoption of such policies would not only reduce the risk of nuclear attacks, but aso pave the way to the adoption of more comprehensive nuclear disarmament measures toward the goal of a nuclear-weapon-free world. See Why No-First-Use.